There’s a popular belief in Italy that Italians basically have thought the world, and especially the French, how to really make wine. This belief is based upon what the Romans did for the spread of grapegrowing and winemaking in all Europe around 2000 years ago.
I am sure that Caesar and Probus had a great influence on ancient people drinking customs, however the wine they drank was much different from ours, sweeter, denser and often mixed with resin, honey or even salt water. Modern wine was born around XVIII century and italians played a very little part in it, at least until the late 1800s.

One of the best insight on the state of italian (and world) wine of this period was given by Redding in his “A History and Description of Modern Wines” (first published in 1833). The tenth chapter, “The wines of Italy and islands”, is a valuable source of informations on the issue. 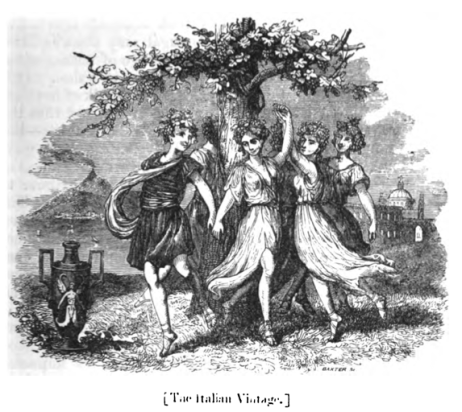 Italy, at the time still a divided country, has a great potential, but lacks of motivation and care.

That Italy does produce good wine is undeniable, as well as that she grows a vast deal of what is bad.

This is mainly caused by the commercial barriers between all the tiny states in the peninsula, which leaves no stimulus towards improvement.

The petty sovereignties of Italy are a blight upon her manufactures no less than upon her civilization. Many of these are shut up to themselves, as regards their production and cannot interchange with the neighboring states without a great disadvantage, owing to pernicious duties, high beyond all reasonable limit compared to the value of the article.

Thus consumption remains local and the farmer, focused on quantity over quality, has no reason the change the way he grows his grapes  or makes his wine.
The vine is trained in the high method (the so called “vite alberata” or “maritata”), letting the plant grow with far too much vigor. But there are other problems too: corn, grain and other vegetables are grown between the vines, planted on fertile low plains and never pruned. Today we will consider such vineyards a complete mess.
In the cellar the situation is even worse: the grapes are not sorted and thrown in vats till dirty from the year before, while new harvested fruit is added in the must day after day.

There are some decent wines in the country, but they are not up to their potential. Redding especially praises Naples and Tuscan wines.
Talking about the former he cites the Vino Graeco and Lacryma Christi, both sweet and rich in perfume and flavour (Lacryma Christi is described as a vin de liqueur, probably very different from the one that brings the same name today). The only wine which seems clearly recognizable is somehow unexpected.

A white mousseux wine, having a pleasant sharpness, is made on the Campagna, called Asprino (sic).

We cannot be sure, but Redding is probably talking about the Asprinio di Aversa.
As for Tuscany, its fame is already well established, a legacy that lasts until today. The relatively liberal government stimulated the landowners in improving the land and emulation spread good grape growing practices through all the region. Chianti wine is cited: Bettino Ricasoli had still to invent his famous recipe, but there seemed to be very good examples produced not far from Florence. Other interesting wines can be found in Orvieto, Monte Fiascone (“Est est est”, here called “Est est”), some parts of Sardinia and Elba.

There are very notable absentees in this list.
Sicily, today’s most dynamic wine region in south Italy, sums up well all the problems of italian wines, with just a few decent examples produced near the Etna.

Sicily produces wine in great abundance; but the same remarks which apply to the bad husbandry and vintage of Italy will apply to this island.

Marsala is  quickly dismissed as a second class Madeira at best.

Marsala, when obtained without the admixture of execrable Sicilian brandy, is an agreeable wine, something like Madeira of second class.

But the greatest surprise comes from Piedmont: in the first half of the XIX century there is still nothing comparable to modern Barolo. Juliette Colbert is already living in Piedmont and probably promoting the Langhe Nebbiolo at the Savoy court, but the wine has still to attain the fame it has today. Some decent examples are made in the part of the kingdom which today today belonging France.

Savoy and Piedmont produce red wines of tolerable quality; those of Montmelian and St. Albero, in Savoy, are among the best in the country and come from the slopes of Mont Termino and St. John de la Porte. […] The best vin de liqueur is made upon the Rhone, near Chamberry, from a Cyprus species of vine. An effervescing wine is made at Lasseraz from malvasia grape. Asti, near Marengo, and Biella, produce red wines of tolerable flavour.

No mentions of nebbiolo, barbera or moscato: the success of Piedmont wines will have to wait some decades.

Of course it would be an error to only refer to Redding on the matter: he may had a personal distaste for Italian wines or just a negative experience. But his judgement is preceded by the one from Alexander Henderson in “The history of Ancient and modern wines” (1824) (whom Redding probably used as one of his sources) and confirmed by Thomas George Shaw in “Wine, the vine, and the cellar” (1864). Shaw is a little bit more benevolent towards Marsala wines and his hopes for the future are somewhat brighter: in 1861 Italy had finally become a unite country, commercial barriers were being abolished and italian winemaking was finally waking up from its long sleep.

Conclusion
This brief post was not written to bash italian wines or Italy. On the contrary I think it offers a different perspective on today’s italian excellence in winemaking. What would Redding say now? He would surely be surprised – and pleased -.
Barolo, Barbaresco, Super Tuscans, Amarone, to name the most famous “brands”, the whites from Friuli, Taurasi, the fine sparklers from Franciacorta and Trento, Prosecco, to list another few: even though the grapes they are made of may have roots in ancient times, the form we drink them today was shaped in the second half of the XIX century or later. Chianti may fare back to the XVII or XVIII century, when Cosimo III de’ Medici delimited its production area in 1716, but its composition is unknown and was probably different from today.

Italians don’t need to look back to 2000 years ago to find glory for their wines, they don’t need to recall legends or myths from the classical age.
As Redding states:

The Falernian of Horace and the Shiraz of Hafiz are, it is too truly to be apprehended, both exaggerations (sic), if they could be placed in comparison with the delicate flavour of modern French growths of prime character; besides, who constituted them connoisseurs in wine for any but their own palates? Both wines would no doubt intoxicate and both wines were delicious to the taste of the poets and their friends; but in times when plain truth is most valuable, the probability, however much it may injure early and agreeable associations, is always to be strictly preferred. Writers who follow their predilections are apt, with little regard for other considerations, to imagine modern things deteriorated from those existing in past time. Thus some assert that the wine of the ancients was best, though they are incapable of deciding the question one way or the other. No one is justified in accrediting a fact that rests upon varying and worthless conjecture.

But Italians could at least thank their fathers, grandfathers and great-grandfathers, who experimented, corrected and improved the poor winemaking and grape growing methods of their ancestors. Of course, to do this they had to learn from who, at the time, knew better than them, that is the French, towards which they have a big debt.

In this troubled times for Italy, in the economic and political uncertainty, the quality of italian wine is one of the few bright lights and one of the greatest hopes for the future. As an italian I want to hope – and I want to drink -.

This morning my wife heard me screaming when I read the email from the Wine Scholar Guild telling me that I had been chosen as Italian Wine Scholar Instructor of the Year.
There is something compelling about the construction of identity that some "New World" regions carry on, especially famous ones like Barossa (for wine, in my case).
The 2000 yen Barolo is in good company now.
I must be tired.
When I saw the price of this wine on the shelf I was like "Pfff, yeah sure", but then I saw that the ullage was ok, the price was cheap so I thought "Why not?" and I bought a bottle.
Thanks to all the people who came yesterday to the Marsala @cantineflorio seminar! We had four Marsalas and one fortified Muscat of Alexandria and thanks to @scaravellimatteo for the wonderful lesson.