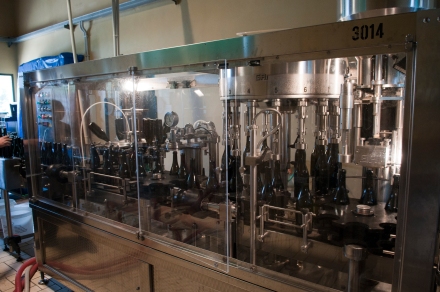 The Soave consortium has published a new article on its site, stating that finally Soave DOC and Soave Superiore DOCG will have to be bottled near the “area” of production. This is a bit of a vague statement, since the bottling will possibly take place in all Verona province plus some centers in the province of Vicenza, but anyway.

I was thinking of this issue recently, asking myself why should we care about the bottling place of a wine, as long as it is made according to the rules guaranteeing its typicity and as long as we can be certain of its origin.
Imagine all the advantages of sending in bulk Barolo or Brunello di Montalcino to bottle them in the Country where they are going to be sold!

First, it will be less expensive: producers (especially small ones) would be no more encumbered by the process and they could increase profit. The importers will have still to do the job, but they could use economies of scale to bottle all the wine they are handling locally. They could even bottle “on demand” and decide which size best fit the market in a given moment: haven’t you ever desired to buy a half bottle of a prestigious wine because you are short on money or you are the only drinker in the family (sob)? That could be possible. 187 ml piccolos of Pétrus: sounds good, uh?
Or maybe you are having a lavish party in your garden: why not ordering a 225L cask of St. Emillion Grand Cru for your friends?
Shipping in bulk would also be more environmental friendly: as glass has its own (sometimes quite substantial) weight we could reduce the carbon footprint and employ less energy for the transportation. And did you ever heard of bottle shock? A wine container will be probably more resilient to the variation in weather and temperature during shipping.

So is it really important the place a wine is put into its bottle? Is there something magic, like a “bottling terroir”, that we must respect in order to really appreciate the wine? The glass, the bottling machine, the weather outside the factory?
No, there isn’t: in a perfect world bottling on site would probably be the best option, cheaper and more flexible. Sadly, this is not a perfect world.

As you may know, the goal of denominations of origin is not, strictly speaking, quality. Of course some of them better than others, but still there exist loads of atrocious or meaningless DOCs (or DOs, or AOCs) that no one will take as a guarantee of quality.
No, the goal of a denomination of origin is certifying the authenticity of a wine, the fact that, good or mediocre, what you are drinking is really what is written on the label.
For this reason, bottling in the area of production (or nearby), has a meaning only as far as it makes authenticity easier to verify.

The problem boils down to this: a producer selling in bulk wouldn’t really know how his wine is going to be treated. The risk of mishandling and counterfeiting for a top tier wine shipped this way is enormous, especially in some less regulated markets. Someone receives 1 hectoliter of Pauillac AOC from Bordeaux and all of a sudden they are selling two or three hectoliters. The wine starts tasting nothing like the real one, people notice, they blame you (or the region where the wines come from) and you lose customers.
Thus, mandatory bottling represents a first protection against this risk: you make your wine, you bottle it. Now it is ready to be sold in the exact condition where you left it. No other handling is allowed. As a counter-counterfeiting measure it is very basic, but it is already something and more than enough for the vast majority of what is commonly seen on the shelves.

Finally, some denominations command an ageing period in bottle before release, that is, the community of producers from that denomination have assessed, at some point in time, that their wine really shows its nature only after it has spent some time in the bottle. Again, in a perfect world that could be delegated to the importers, but in the real one we would never know the conditions at which the wine has been stored at the Country of arrival. The Brunello in Brazil would end up being different from the Brunello in Japan that would be different from the one sold in India. And what you would do with traditional method sparkling wines? Using transfer? Too complicated.

So, after much thinking, I have come to my conclusion: local bottling is an essential step for a denomination willing to present itself in an organic and consistent way to the public. Except for those wines not caring of counterfeiting, it is probably never going to disappear. And that’s for the better.