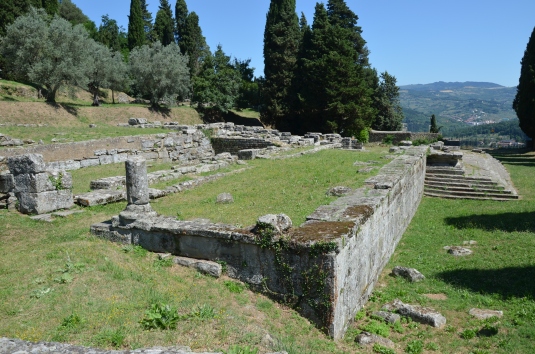 There is an extremely annoying trend in the “narration” of wine: when someone talks about tradition, when someone talks about the quality of this or that wine, chances are that they will feel compelled to trace back the roots of their excellence to the Ancient Romans (sometimes the Ancient Greeks as well). This happens especially in Italy and results in a false narrative whereby a direct line is traced between the 753 BC and the 2018 AD.
This connection between Roman Empire and present stems from a deep ingrained nostalgia for Antiquity, an age which is usually conceived as “white”, “clean”, “glorious” and “more just”.

I would like to point out a few things.

Ancient Romans were not Italians, Italians are not Ancient Romans. That is why they are called differently. Here and there may be some genetic connections, but in the course of History Italy has been invaded by so many people that the link may be weaker than it is commonly thought. “Ancient Romans” is also a very broad term, since there existed a plethora of pre-Roman tribes throughout Italy which were “romanized” during hundreds of years.

Linking the quality of your wine now to one that existed 2000 years ago in the same area is silly. The modern Italian register of grape varieties has many inaccuracies – and it is (hopefully) compiled using the best scientific knowledge in our possession. Therefore, identifying the Pucinum as Prosecco, the Reticum as Valpolicella, the Mamertinum as the modern Mamertino DOC, as many like to do, is impossible. Moreover, how much did these wines change during their history? Was the Falernian made in the first century before Christ the same that was made 200 years after? There was no denomination system in the ancient world, thus we will never know, as we will never know their real taste.

As I have written about this topic in the first post of this blog, in the mid 19th century Italian wine was in a state of complete disaster. While you would have already recognized some producers in France (especially in Bordeaux, Burgundy and Champagne) in Italy there was absolutely no drive or motivation to make high quality wines. Vines were grown under the mezzadria system in the center and north, on mixed crop fields, and wines were made under hygienic conditions that were questionable to say the least (this not only in Italy to be honest). Even the most celebrated 1716 edict by Cosimo de’ Medici III was like a swallow in the mid of winter. (1)

In the second half of the 19th century a new generation of winemakers/scientists was finally born; they were men like Carlo Gancia, Antonio Carpenè, Giulio Ferrari, Clemente Santi & Ferruccio Biondi Santi: they did not like the state of things and believed that Italy could produce great wines as well, even greater than those from France. To do that they studied, they learnt, they used science (which in the wine marketing today seems sometimes a bad word). Step by step wine started getting better, although the progress was slow.

They were followed by other giants, especially after the two World Wars. In random order: Antonio Argiolas, Mario Schiopetto, Livio Felluga, Emidio Pepe, Edoardo Valentini, Franco Biondi Santi, Giacomo Tachis, Stanko Radikon, Josko Gravner, Marco de Bortoli, Franco Ziliani, Angelo Gaja, Elio Altare & the Barolo Boys (sounds like a rock ‘n’ roll band from the 1960s), Luigi Antinori, Mario Incisa della Rocchetta and sure I am forgetting someone.
You may have your own opinion on each of them (some can be quite divisive), but their importance in advancing the quality and the image of Italian wine both locally and abroad cannot be denied.

And the best news is that their legacy still vivid, some of them are still alive. Theirs are the stories that should be narrated first, not vague records from a dusty past that we do not know for certain. The second best news is that there is still excellence today: the new generation of winemakers and entrepreneurs are doing a great work and wine is one of the few sectors in Italian economy still looking healthy.

So if you want to thank someone for the good Italian wine that you have in the glass, thank these people, thank Modern Italians – not Ancient Romans.

(1) It must be noticed that the only two regions where there was a limited market for higher quality wines before 20th century were Piemonte and Toscana. Not surprisingly they are today the most famous and recognized sources of Italian fine wines.